New user
After 122 games and 6 months, Néstor has gotten the first torneo de Ajedrez Jubilado, thanks to a brilliant performance where he has won to several strong players.

Néstor is a strong player and is the main promoter of this chess variant. He makes it known in his blog Ajedrez Jubilado.

Last week, in a simple act, a little trophy was given to him by his grandsons. The picture shows the ceremony in the moment when the trophy is being given by Ramiro, who participated in the tournament with his brother Pablo. 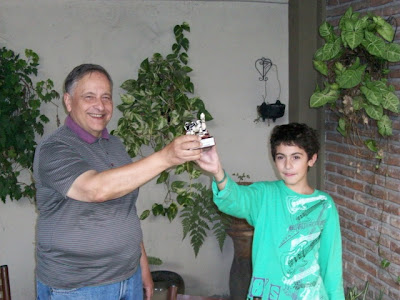 A picture of the simbolic trophy. 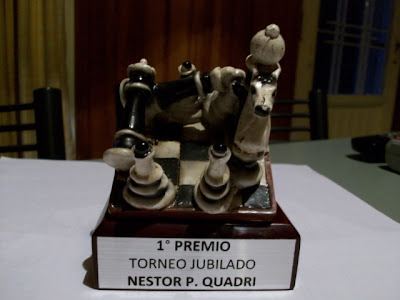 Sojuzgado and Ariza, who reached to the last round and tied in points, were two meritorious runner-ups, making more valuable the first position.

The Opengames's team is also grateful to all participants from 10 countries, who have done a very interesting tournament.

In this year, there are more Retired Chess Tournaments, so we invite to all users to follow participating.

Write to me for remove it

About Friends pages FAQ. Thanks Policies